Mr Torome (center) pointed out that since Kenya embarked on a devolved system of governance in 2010, effort has been made to align the data collected with the 47 counties and their development plan. ©AFIDEP

One of the things that the first International Conference on Population and Development (ICPD) in 1994 envisaged was that countries would put in place structures and mechanisms to enable data on population inform policies and programmes at the sub-national level. Further, the need to have development data at the local level has been amplified by the sustainable development goals as an important means through which resource allocation can be directed to reduce inequalities within countries.

The need to have development data at the local level has been amplified by the sustainable development goals as an important means through which resource allocation can be directed to reduce inequalities within countries. Click To Tweet

However, there are challenges and obstacles to countries realising this action and much of it has to do with unavailability of data at the sub-national level and inability to conduct small area estimations using available population data at the national level.

To take stock of efforts by countries to have and use sub-national data, the ICPD25 Nairobi Summit had a dedicated session on the use of data for development planning at the sub-national levels.

Mr Saitoti Torome said that among key challenges is that it is difficult to get some datasets at the lowest levels, compounded by the fact that data is periodical and expensive to collect. He however noted that in addition to the national census conducted every ten years, there are other complimentary data collection surveys such as the comprehensive household budget surveys that help to determine poverty levels.  These surveys have helped to inform development of an equalisation fund that is given to marginalised regions to implement specific projects to do with health, water provision, and other areas that the communities identify as areas of need.

Mr Torome pointed out that since Kenya embarked on a devolved system of governance in 2010, effort has been made to align the data collected with the 47 counties and their development plan. “We used to have statistical abstracts at the national level but now these are also available at the county level and are important in helping the private sector make investment decisions,” he said.

Dr Agwanda said one approach to addressing the lack of data at the lowest administrative levels was to institute administrative data such as the health surveys at the sub-national level. And even more important to determine data that is already available and have at hand data scientists who can analyse it to “show interactions between people and the government.” Having data systems and the capacity to analyse and interprate is the only way to move away from “opinion-based policy-making and move towards evidence-based policymaking,” he said. As part of skills building, he emphasised the need for citizens to be empowered to know, access and use data. “We cannot keep data as a secret. It is owned by the citizens. The first fundamental principle is to provide them with access,” he said. He further underscored the need to use data to anticipate the future and take necessary steps to mitigate challenges rather than waiting to react to the problems when they happen.

Mr Charles Banda presented a case study of Zambia, where they conducted a sub-national analysis using a multi-dimensional approach with three indicators: Standard of living, Education and Health. This multidimensional poverty index was one way they overcame the challenge of data sources limitation as it offers multiple variables. The analysis has helped determine which counties are most deprived, which ones are most affected by issues to do with child marriage, school dropouts, low employment rates, among others. “The analysis gives a clear picture of countries most affected and informs where interventions are needed to reduce inequalities,” said Mr Banda.

Central to the discussions that ensued was the importance of internal funding for data collection exercises. This funding needs to be generated between the government, the private sector and other stakeholders. It was noted that the private sector are important players as they need the data to determine their markets. Linked to this is the capacity for countries to harness technology to collect, analyse and make data easily accessible within a short period of time.

An important recommendation was that in addition to deciding resource allocation based on population size and needs at the local levels, there was need to go further and determine level of need-based on age structure and sex. Different ages and sexes have different needs. “The needs of an 18-year-old are not the same as those of a 3-year-old.” It was noted that even though the formulas do not consider structure, Kenya is probably among the first country in the region to include intersex as a type of gender during the 2019 national population census. It however remains to be seen how the data collected will inform interventions for this particular group. 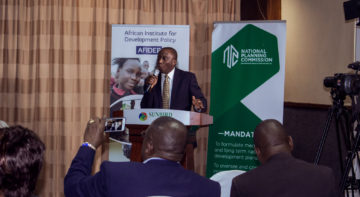