Abuse of alcohol and drugs is one of the major problems Kenyan adolescents are grappling with. Photo: Cabrera Photo/Flickr

If the increased media reports on the sexual escapades and drug and alcohol abuse by Kenyan teenagers are anything to go by, then it is evident that young people are grappling with major challenges that need to be addressed urgently. Failure to tackle these challenges could cost Kenya an entire generation.

On 27th and 28th October 2015, the Kenyan Ministry of Health convened the first National Adolescent Health Symposium in partnership with the African Institute for Development Policy (AFIDEP), the African Population and Health Research Center (APHRC), Center for the Study of Adolescence (CSA), UNICEF Kenya and other partners. The symposium whose theme was Evolving Challenges in Adolescent Health: Reflecting on Post 2015 Sustainable Development Agenda sought to deliberate on the health challenges of adolescents and how to address them effectively.

According to the World Health Organization (WHO), adolescents are young people aged between 10 and 19 years. As it was underscored in most of the symposium discussions, many at times, this population is forgotten in development discussions where more emphasis may be placed on children and youth in general.

“The symposium has really come at the right time [as] we are seeing a lot of issues to do with adolescents. In the recent past we have seen adolescents indulging in reckless behavior; going to pubs, underage drinking and drug abuse, sex and so on,” said Dr Eliya Zulu, the Executive Director at the African Institute for Development Policy (AFIDEP).

What started as a seemingly isolated case where 45 high school students were caught in a bus having sex and abusing alcohol and marijuana on 6th August 2015 has now become a national issue. On 5th October 2015, another 550 students, some of them minors, were caught in a club in Eldoret town drinking alcohol, abusing drugs, and possibly having sex. The youngsters had lied to their parents that they had gone for choir practice, shopping and other innocent errands. Barely two weeks later, over 200 minors were arrested in a Nairobi bar drinking alcohol and dancing, some of them as young as 9 years old.

Adolescents are a vulnerable population

These reports underscore the vulnerability of adolescents with regard to their sexual and reproductive health. According to the 2014 Kenya Demographic and Health Survey, about 1 in every 5 adolescent girls aged 15-19 years is already a mother or is pregnant with her first child. It is great that the Kenya Ministry of Health recently launched the National Adolescent Sexual and Reproductive Health Policy. However, it is the implementation of this policy that is going to turn the tide by providing comprehensive age-appropriate information and services on sexual and reproductive health to young people all over the country.

Adolescence is a period of self-discovery and adolescents therefore require special attention and guidance. At the same time, these are times of rapid modernisation, globalisation and technological advancements where adolescents are exposed to more information than ever before in the context of a changing family structure.

“Parents are too busy chasing career and/or business success to pay enough attention to their teenagers.” This is one statement that was echoed in most of the discussions before and during the Adolescent Health Symposium. Those of you who are parents may go up in arms in protest justifying their absence or absolving themselves from blame, but the reality is that society is not playing it’s role and parents/guardians are top on the list, seeing that they are the primary caregivers.

In her keynote speech, Dr Caroline Kabiru, a research scientist at the African Population and Health Research Center (APHRC) underscored the need to shift our attention to this population.

“About 1 out of every 4 Kenyans is an adolescent. There is little doubt that a large population of healthy, well-educated and fully empowered adolescents is a valuable national asset and, indeed, one of the key ingredients for the achievement of the demographic dividend. However, if we reflect upon the situation in Kenya today, adolescents are one of the most vulnerable sub-populations in the country,” pointed Dr Kabiru.

According to Dr Kabiru, education is critical for the health and development of children. However children raised in poor backgrounds such as urban slums are often at risk of dropping out of school.

“Pervasive poverty continues to be a critical barrier to school completion. In other words, there are significant inequalities in education that must be bridged,” she indicated.

The vulnerability of adolescents was further emphasized by several experts during an AFIDEP-led panel discussion on adolescents and the demographic dividend on day two of the Symposium on 28th October 2015.

Dr. Khama Rogo, a distinguished global reproductive health expert, poignantly pointed out that there exist major inequities in Kenya as a result of a systems failure.

“Our economy is growing but large inequities persist, [and] we have systems in our country that promote these [inequities]. For example, every rich suburb in Nairobi has a neighbouring slum,” he noted.

He cautioned that this situation is a recipe for national crises such as the Arab Spring, and the radicalisation of youth to join terror groups such as Al-Shabaab and Boko Haram becomes highly likely. In fact, he pointed out that Al-Shabaab and Boko Haram are the “demographic dividends’ that Africa is reaping out of its failure to invest meaningfully in the health and development of young people.

Honorable Kenneth Okoth, Member of Parliament for Kibra Constituency indicated that for there to be significant change in the education system, which has a massive impact on the future of adolescents, the government has to take leadership and make the right investments now.

Further, Siddhart Charttejee, the UNFPA Country Representative, emphasized that Kenya would go nowhere without investments in the empowerment of girls and women.

Speaking on the need to address the sexual and reproductive needs of adolescents, Dr Josephine Kibaru-Mbae, the Director General, National Council for Population and Development (NCPD), stressed that we have to cease burying our heads in the sand.

“We cannot continue working as though adolescents are not having sex because they are”¦family planning commodities are not available to those who need them most,” she said.

The lack of government investments in family planning programmes and service provision for young people has left this population will limited options and hence we are faced with increased cases of teenage pregnancies, unsafe abortions and sexually transmitted infections (STIs). Hopefully, the new Adolescent Sexual and Reproductive Health Policy 2015 will address most of these gaps seeing that the 2003 Adolescent and Reproductive Health and Development Policy was barely implemented.

As Dr Kibaru puts it, there’s some hope in the future since the government is also working to have a national family planning programme implemented at the county level.

“If we really want to develop adolescents, and young people in general, into citizens who will drive the country forward, we cannot be looking at one aspect of adolescence,” said Dr Zulu during an interview on the sidelines of the symposium.

Throughout the symposium, the speakers underscored the need to prioritise adolescent health more so with the recent adoption of the sustainable development goals (SDGs). The SDGs give us a fresh start to make things right where we failed with the millennium development goals (MDGs).

The most pressing need of all is more data on adolescents. As Dr Kabiru clearly put it, “we cannot assess progress in adolescent health if we have no metrics to assess change.”

The lack of monitoring, learning and evaluation mechanisms for programmes aimed at benefiting youth (including adolescents) has made it difficult for implementers to be effective in the interventions. This was further emphasized by Dr Rachael Nyamai, the head of the Ministry of Health Neonatal Child & Adolescent Health Unit who said that there is urgent need for a national adolescent health survey to address the existing gaps in research evidence.

Adolescents need to be part of their change-conversation

It was encouraging to see several adolescents at the symposium, some of who were active participants in the discussions.Â As many speakers emphasized, adolescents need to be part of their change-conversation.

Following the illuminating discussions from the symposium, all the relevant stakeholders need to roll up their sleeves in order to move the conversation forward, and walk the talk. At the close of the meeting, Dr Rachael Nyamai announced some specific actions that the Ministry of Health plans to take in a bid to address the challenges raised and leverage on the opportunities highlighted. Top on the list is the formation a multi-sectoral forum to look at how to move forward the national adolescent health programme. The Ministry also plans to lobby for funds to conduct a national adolescent health survey to understand the prevalence of major health issues affecting adolescents and the level of access to services needed.

Hopefully, when the symposium re-convenes in 2017, we shall be celebrating major milestones because indeed #EveryAdolescentCounts. 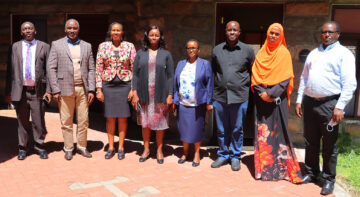 Cochrane Kenya: A platform that Aspires to Inform Health Decision-Making Processes in Kenya and Beyond
Learn More